One of the most common reasons given by people for supplementing their diets with cannabinoids, such as those found in cannabinoid-rich, full-spectrum, hemp-derived CBD oil, is to treat various forms of anxiety. Anxiety is not a single disease but a class of similar disorders. Included in this list is a condition known as post-traumatic stress disorder or PTSD. Many PTSD patients and researchers alike claim that CBD oil for PTSD is effective at helping to control the condition.

Most people are familiar with PTSD as it relates to military veterans who have been exposed to front-line violence. But the condition, which causes panic-attack-like symptoms, is not just limited to soldiers — it can happen to anyone. In fact, women who have been victims of abuse are far more likely to suffer from this condition than men. However, it is U.S. veterans advocacy groups which are leading the fight to raise awareness and increase research into the effects of cannabinoids on PTSD patients.

Just recently, in early September 2018, as the result of pressure from veterans groups, a bill was introduced to Congress that would expand access to medical cannabis for veterans. It would allow Veterans Affairs doctors to recommend CBD oil and other cannabis products to their patients, and would also allocate $15 million to research into the efficacy of cannabinoids in treating the condition. Although this is not the first time this type of legislation has been advanced, attitudes in Washington in regards to medical cannabis have become much more favorable just within the past year.

Already the majority of U.S. states with medical cannabis programs, including those which only allow the use of low-THC, high-CBD cannabis oils, have looked at the evidence and have been convinced that PTSD should be on the list of medical conditions.

Anxiety, even extreme anxiety, is an evolutionary development which has helped to keep humans — and, in fact, most vertebrate animals — safe and out of harm’s way for eons.

When the brain determines that it is in danger, areas of the brain are activated which prepare the body to react either by running away, hiding or fighting back. This is known as the fight or flight response. These changes in physiology are brought about by the release of signaling molecules known as neurotransmitters. Once the danger passes, another set of signaling molecules is produced, the purpose of which is to calm the body down and instill feelings of safety. This second process is known as fear extinction.

It is believed that this process has gone awry in PTSD patients. For reasons unknown, the fight or flight response takes over, and the fear extinction process stalls. This causes those who suffer from PTSD to feel intense fear even when they are not in danger.

Although the condition is most common in those who have undergone some kind of violence or trauma, it may not be the trauma which causes the condition. Many people who are involved in traumatic incidents do not suffer from PTSD. This suggests that the problem is an underlying issue which is related to brain structure or an imbalance in neurotransmitters, or even both.

Interestingly, CBD has been shown to have the ability to help regulate the production of a hormone thought to be responsible for fear extinction, known as serotonin. The production of serotonin is mediated by a neurotransmitter called anandamide. Anandamide is considered to be an endocannabinoid — a cannabinoid which is produced naturally by our bodies.

Research suggests that CBD mimics the effects of anandamide, increasing the production of serotonin and inducing feelings of safety. Conversely, another well-known cannabinoid, THC, has been shown to have the opposite effect and can increase activity in areas of the brain thought to be responsible for feelings of fear and anxiety.

Martin Lee of the Multidisciplinary Association for Psychedelic Studies (MAPS) is also the director of the ProjectCBD.org. Lee has been closely studying the association between CBD and PTSD, as well as other anxiety disorders.

In a report on the topic, Lee wrote, “Researchers found that people with PTSD had lower levels of anandamide, an endogenous cannabinoid compound, compared to those who did not show signs of PTSD. Innate to all mammals, anandamide (our inner cannabis, so to speak) triggers the same receptors that are activated by THC and other components of the marijuana plant.”

Lee continues, “Scientists have determined that normal CB-1 receptor signaling deactivates traumatic memories and endows it with the gift of forgetting. But skewed CB-1 signaling, due to endocannabinoid deficits (low serum levels of anandamide), results in impaired fear extinction, aversive memory consolidation, and chronic anxiety, the hallmarks of PTSD.” 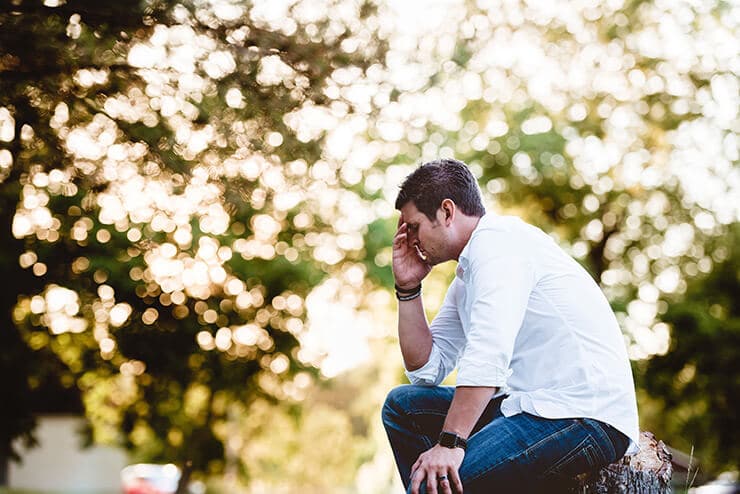 Research Studies On CBD for PTSD

In 2016, a group of UK and Brazilian researchers studying the effects of CBD on the brain’s responses to anxiety, fear and trauma showed that treatment with CBD “reduced contextual fear memory expression” in mice. Their findings were published in the December 2016 issue of the journal Frontiers in Pharmacology.

In this study, researchers observed the biochemical responses produce in the brains of mice that had been subjected to fear conditioning. What they noticed is that CBD changed the way that the brain functioned when exposed to signals which the mice associated with past trauma.

This suggests that CBD does indeed have an effect on the system of neurotransmitters responsible for regulating feelings of anxiety in mice. That’s great for lab mice, but what about human PTSD patients?

A group called Care By Design recently surveyed 300 PTSD patients about the effectiveness of various medications — including cannabinoids — to treat PTSD. The survey asked patients how these medications affected each of five common symptoms of PTSD: anxiety, depression, pain, anger or irritability, and sleep problems.

Respondents reported that supplementation with cannabinoids such as those found in full-spectrum CBD oil was more effective than any of the other medications prescribed to reduce their symptoms. Not only that, but CBD was also the least likely treatment to make symptoms worse.

Another unfortunate result of the survey is that it showed that veterans were being prescribed pharmaceutical medications at a higher rate than civilians, and were more likely to be prescribed medications that worsened their symptoms. Roughly half of the respondents claimed that they were prescribed narcotics which actually made their anger and irritability, depression and sleep problems worse, rather than better.

The good news of the study was that 80 percent of the respondents who reported using CBD-rich cannabis to treat their PTSD symptoms said that not only did it improve their condition, but it also resulted in a reduction in consumption of alcohol.

Can THC also help with PTSD? The prevailing opinion on this is “yes and no.”

In an interview with Scientific American, Dr. Marcel Bonn-Miller, a psychology and psychiatry professor at the University of Pennsylvania's Perelman School of Medicine, stated, “If you want to actually treat PTSD, most of the evidence is pointing toward CBD. But most people with PTSD are gravitating toward [marijuana] products with high THC levels, which may help in the short-term but are likely to worsen their symptoms over time.”

In an interview in HERB, Ontario-based physician and specialist in PTSD Dr. Mike Hart claimed that every patient is unique, with individual needs, and says that he often recommends a regimen of CBD during the day and THC at night.

Dr. Hart says, “CBD has been shown to be effective in the literature for PTSD. Because of that, I know that patients can benefit from it in the daytime without having to use THC. I limit THC use in the daytime because I know that it can cause some short-term memory problems and cognitive problems. My goal with my patients is to improve their functional outcome, so I want to make sure that I’m treating the symptoms of PTSD, but I also want to make sure that I’m actually improving their overall functioning.”

CBD oil has not only been shown in studies and surveys to provide relief for PTSD patients, but it has also been shown to help manage additional anxiety-related conditions such as SAD (social anxiety disorder), OCD (obsessive compulsive disorder), panic attacks and others.

In a recent poll, more than 8 in 10 U.S. veterans said they believe all forms of medical cannabis should be legalized. Many U.S. states already agree, and lawmakers in Washington are now starting to pay attention as well.

Much more research is expected to be undertaken in the coming years as attitudes toward cannabis — hemp, in particular — shift, and laws become more favorable, allowing researchers and doctors to study the use of CBD in treating PTSD without fear of breaking the law.

If you have PTSD and would like to try CBD, it is best to look into brands that have zero THC in their products (because purity is key), that have the option of a money back guarantee (truly letting you see first whether CBD is for you), and that are transparent with the batch test results of their CBD products. Joy Organics ticks all those requirements and more, making them one of our strongly-recommended brands. What we love about them too is that they are family-owned and family-operated. They have a great story that gives their company heart which is so rare to find in a ton of CBD companies popping up these days.

These statements have not been evaluated by the Food and Drug Administration (FDA). These products do not intend to diagnose, treat, cure, or prevent any disease. PureGreenLiving does not offer medical advice. Any information shared through our site is not intended to be a substitute for medical advice, diagnosis, or treatment and not intended to cover all possible uses, directions, precautions, or adverse effects. Please consult your doctor or healthcare professional about potential interactions or other possible complications before using any product/s.
Share

Are There Different Strains Of CBD Plants?