Recap: What is CBD?

Cannabidiol, popularly known by its acronym CBD, is a common cannabis plant extract that has been used over the years for treating a range of medical conditions, mostly physical and psychological disorders. CBD is extracted in oil form, which is then processed and marketed for various uses. It is typically extracted from CBD-rich marijuana strains. CBD Oil can contain other cannabinoids, i.e. Tetrahydrocannabinol (THC), which some users believe enhances the effectiveness of CBD. However, the other cannabinoids contained in CBD can have some unintended effects, for instance, THC is known to cause mind-altering psychoactive effects in the body. Although CBD is considered to be legal if they contain 0.3% THC, CBD is sufficiently effective on its own, based on several personal anecdotes.

Something New: What is Kratom?

Kratom (MitragynaSpeciosa) is a plant that grows naturally in southeast Asian countries such as New Guinea, Thailand, Indonesia, and Malaysia. It is quite famous for its history as a substitute for opium, and its usage for pain management, as a dietary supplement, and as an energy booster. Kratom is a member of the Rubiaceae family, which makes it a very effective stimulant (at low doses). At high doses, Kratom behaves very similar to Opiates. Kratom has been found to be a good medication for substance withdrawal, with many addicts claiming it was highly efficient in assisting them to quit the more addictive opioids like fentanyl, oxycodone, and heroin. Kratom can be passed into the blood system via chewing, smoking, steeping in tea, or mixing the powdered form with warm water or yogurt. The purity of Kratom is dependent on the manufacturing process, especially the cultivation and drying processes. 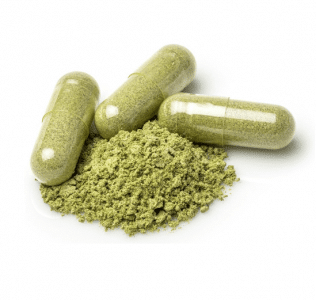 Kratom can be ingested as a capsule, extract, or pill. Naturally, the Kratom leaves can be chewed or brewed as a tea, mixed with food, or smoked. The most preferred method of consuming Kratom is by mixing its powder with warm water or yogurt and drinking it. This is because the active ingredient in Kratom does not need to be activated with heat in order for it to be effective.

CBD can be smoked just like regular marijuana, but it would have to a CBD-dominant strain containing a little percentage of THC in order to harness the therapeutic powers of the substance without getting ‘high’. CBD can also be consumed by administering drops of the oil under the tongue, and holding for about 60 – 90 seconds before swallowing – which is the most popular method of consumption. There are also CBD ointments and creams, which are used mostly for arthritis and other forms of joint or muscle pain.

Kratom didn’t catch up with the mainstream in time to attract interest from researchers, which is why there is less scientific evidence to prove its powers. However, Kratom has risen in popularity over the years and experienced a spike in its usage for pain treatment. Kratom can effectively induce relaxation, reduce pain, and improve the immune system. An online survey of the Pain News Network and the American Kratom Association revealed that over 90% of respondents reported that Kratom was “very effective” at relieving pain and other medical issues”. Kratom is mostly used for acute pain relief from severe tissue damage.

CBD on the other side is suitable for chronic pain relief and has been found to relieve neuropathic pains (pain originating from nerve dysfunction/degeneration). However, the pain relief effect of CBD has been well-established by clinical researches, and as such safer than Kratom.

Kratom has been used to treat problems such as coughing, fever, diarrhea, muscle pain, fatigue, hypertension, and other ailments. A proper dose of Kratom can be used to lower anxiety, decrease pain, induce sedation, and to increase energy and productivity. CBD is capable of treating a range of psychological and physical disorders. CBD is approved for the treatment of epilepsy, multiple sclerosis, inflammation, pain, arthritis, Crohn’s disease, stress disorders, anxiety, and substance withdrawal. Kratom is now being widely used as a medical substitute for heavy opioids and the treatment of substance withdrawal. Kratom has been used to curb the effect of opioid withdrawal until they disappear altogether.

Side Effects and Risks

The common side effects of CBD appear to be diarrhea, tiredness, dizziness, drowsiness, nausea, vomiting, and changes in both weight and appetite. CBD also reacts with Cannabinoid receptors of the endocannabinoid system, inhibiting the secretion of saliva, and thus causing dry mouth. However, a journal published by the Current Drug Safety has shown CBD has no adverse effects upon physiological parameters including heart rate, blood pressure, body temperature and so on. CBD is non-addictive and non-psychoactive.

The side effect of Kratom includes nausea, dry mouth, itching, sweating, and constipation. Kratom has been accused of severe side effects such as seizures, aggression, psychosis, liver damage, and memory problems. However, no scientific backings for any of these claims, and documentation of such occurrences are rare. But one thing to know about Kratom is the purity level of the substance. It is highly advisable not to use Kratom in combination with any other drug, as this can cause the overreaction of the substance in the body. It is recommended to get Kratom from trusted suppliers such as Kratom Crazy, who follow safe manufacturing processes to ensure high purity of the product. The danger of Kratom does not come from the substance itself, but from other drugs being mixed with it. Kratom also has addictive potential, which is caused by regular use for a long period.

With the 2018 Farm Bill being signed into law in December 2018, cultivating industrial hemp as an agricultural commodity at the federal level and removing it from the list of controlled substances has paved the way for industrial hemp-sourced CBD (0 to less than .3 THC content) to be legal in the US.  While the legality of CBD is often a gray area, Kratom is all the more confusing. The Drug Enforcement Administration might do a ban on Kratom and possibly considering it a Schedule 1 drug. There simply is not enough researches on Kratom. But clarification should hopefully surface soon with the National Institute on Drug Abuse giving a research funding worth $3.5 million to the University of Florida for Kratom research.

CBD is well-established both clinically and legally and can be recommended over Kratom. But notwithstanding, Kratom is gradually gaining recognition for its amazing pain relief powers, and clinical researchers will hopefully soon flood towards that area as we look forward to seeing more and more natural treatment and remedy options for us consumers.

These statements have not been evaluated by the Food and Drug Administration (FDA). These products do not intend to diagnose, treat, cure, or prevent any disease. PureGreenLiving does not offer medical advice. Any information shared through our site is not intended to be a substitute for medical advice, diagnosis, or treatment and not intended to cover all possible uses, directions, precautions, or adverse effects. Please consult your doctor or healthcare professional about potential interactions or other possible complications before using any product/s.
Share

Are There Different Strains Of CBD Plants?